Doing my part to further the cause of free goodness on the interwebbernet (thank Ask A Ninja for that), I add this link to Joss Whedon’s upcoming project, airing the 15th to 20th of July.

Come on, it’s got Mal and Dougie!

When I went to pick up my allergy meds today, I got a little sticker shock; 2 one-month supplies, $215. You see, I don’t currently have health insurance nor prescription coverage.  When I did, these prescriptions cost me $20.  When I  told the cashier/pharm-tech who was helping me this, she looked at me in astonishment, then said “Let me see what I can do.” She did a little computer magic and came back with a total price of $175, better but not great.  But as I told her, “I have allergies and no insurance, so I guess I’m paying it.”

I recalled a few years back that I had a prescription discount card that paid for some of the costs, so I hopped online and googled around.  I very easily found sites for prescription plans, but they all seamed a bit shady.  Finally I came to an informational site, NeedyMeds.com, that didn’t seem to be directly selling anything, and very quickly found the Oregon Prescription Drug Program. Upon comparison of participating pharmacies and quoted prices for the allergy meds with some of the other prescription discount sites, the OPDP plan seems the best for me.  Once I get my card next week, the quoted total price for my allergy meds should be $100, not great, but thats $125 off the original price, which after a few months is the price of a Wii.

Back in 1999, we were on vacation and watch the ____ show (can’t remember the name of the show, but it because the Christopher Lowell Show), and Christopher went over his general steps for redesigning a room.  We wrote them down then, and recently came across them again, so rather than keep the random piece of paper for another 9 years, I figured I’d blog it.  Obviously, this is already online at christopherlowell.com, but following is the basics:

Note on “Requires at least”: The Visual Editor button works with TinyMCE version 3.x, which is in WordPress 2.5.  So the main functionality may work in previous versions, but the <!––less––> tag will have to be manually entered in the Code Editor.

Q: When would I use this?

A: One example of a time to use this is if you have a gallery in your post.  You may not want the full gallery on multi-post pages, but one image for those pages would be nice.  Conversely, once viewing the whole post, that introduction image would now get in the way, and would be better off gone. 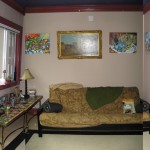 In 2006 We played three-card-monte with the office, kitchen, and guest room.

(there is sound, but you don’t technically need it- about 6 min. long)

this is a climbing spot- you have a something around your wasit with two clips, and you clip yourself to the cable along the side of the wall…. or that’s what you’re SUPPOSED to do…

unlike this guy, who just Walks.

Peggy and I came up with an interesting variation of the Yahtzee card game, try to get the lowest score. In order to keep from just burning (taking a 0) every score we made some additional rules:

Give it a go, and let me know if you can think of additional rules.

(This is a re-post from my old blogspot account)

The Movie Game is something that my friends and I play to pass the time, and test our knowledge of movies and actors. It works by making links between actors using movies they were in, as follows:
The first player states two actors and the movie they were in together, “Mark Hamill and Harrison Ford in ‘Star Wars: A New Hope'”.
The next player states the second actor, names a new actor and the movie they were in together, “Harrison Ford and Gary Oldman in ‘Air Force One'”.
Repeat without reusing actors or movies.
PASSING: If a player can’t make a link, (s)he passes (and drinks if you’re playing it as a drinking game).
WINNING: If every other player passes and the stating player can make a link, the game is over and (s)he wins.
DEAD-END: If that player also cannot make a link, then (s)he must make a different link from the original actor given to them (and drink), “Harrison Ford and Tommy Lee Jones in ‘The Fugitive'”.

Variations:
ELIMINATION: Instead of passing, if a player (named C) cannot make a link, (s)he can issue a “Challenge” to the previous player (B) to prove that player B can make a link. If (s)he proves it, then player C is eliminated and the actor from the challenge link goes to the next player. If player B cannot prove it, the (s)he is eliminated and the actor given to her/him from the previous player (A) goes to the next player (C).
KEVIN BACON: In homage to the basis for the game (The Six Degrees of Kevin Bacon) you cannot pass or challenge if you are given Kevin Bacon as your actor.
POLITE START: In the first time around, a player can force the previous player to give them a different actor to link off of instead of passing/challenging.

Sources: The sources used for links can be a contentious subject. How do you define a “movie”? Does it have to have been a nation-wide release? Do TV-movies count? What about mini-series and TV shows? We play that if you can rent it at the video store (or Netflix), it’s fair game. You could also use IMDB (maybe we should call this “The Actor Game” since the term “movie” is being used so loosely).

(This is a re-post from my old blogspot account)

This WordPress plugin is an amalgam of two other plugins, WP-Authors and Recent Posts.  It shows a list of authors with options to show their total number of posts, and their most recent posts.

Installation is pretty straight forward:  Make sure your theme is widget-ready, upload “recent-by-author.php” to the “/wp-content/plugins/” directory, activate in Plugins menu, and the add it to your sidebar in Design>Widgets menu

Here is the admin box:

Title: – Like most widgets, there is an option for a custom title.

Number of recent posts to show: – When greater than 0, a sublist is displayed under an author’s name with up to the set number of posts.

Show full names – Displays the authors first and last name instead of their chosen public name.

Hide empty authors – If an author has no posts, then they are not shown in the sidebar.

Exclude admin – Hides the admin from being shown in the sidebar.