Long ago, my father, Tod, purchased a piece of property in Arch Cape between 101 and the beach.  It’s was designated a wetland after he bought it, which makes building on it rather tricky, so he has just left it alone for the time being.  Several years after he purchased it, someone put a “4 SALE” sign in a tree on the property, which wouldn’t be much of a problem except that the tree is rather large, and the sign was bolted to it.  When Tod called about the sign, the guy who bragged about putting it up said he did it because the trees on his lot (adjacent to my father’s) were to small to be seen from the freeway, and when asked to take it down, just laughed.

Fast forward to about a month ago, Tod decided it time for the sign to come down.  He called the number again, but found it was disconnected, so taking the matter into his own hands, he with me in tow, set off to cut down the sign.

Following are a few pictures of him, nearly 70, climbing up the tree.  Look for his blue shirt and orange safety strap. 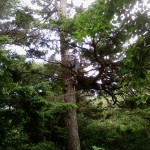 One thought on “Up a Tree”