1: Soak bread cubes in milk in a separate bowl

2: In other bowl mix all other ingredients

3: Once bread cubes have softened squeeze out milk and add bread to the bowl and mix thoroughly

5: Blop meat mixture onto the grill and cook for roughly 7 minutes.

NOTE: to make as loaf or in the oven, cook at 350F for an internal temperature of 160F

Directions:
1: In food processor or blender, puree all ingredients, minus meat and dough, till smooth.

3: Mix Meat and Puree together to create filling. Let cool enough to handle.

5: On Floured board, roll out dough fairly thin; use bamboo skewers or stir sticks as roll-guides. Use a drinking cup or mug as template to cut out small circles of dough.

6: Fill each dough circle with 1 spoonful of filling. Fold in half and pinch dough closed. Place on tin foiled baking sheet. Beat up egg and brush on as a glaze, if desired.

7: Cook for 15-20 minutes until golden brown. Let cool and enjoy warmed or cold.

Directions:
1: Cut green beans in half, about 3″ in length

4: Cut bacon in half lengthwise and wrap up 3 or 4 green beans in one bundle and secure with a toothpick. Place finished wraps in a shallow glass pan.

5: Drizzle the melted mix over the bundles until mixture is gone.

Directions:
1: In a large glass bowl warm the cream cheese in the microwave for one minute. Mix in the spices first, letting them sit for at least 10 minutes

2: Mince up apple, nuts, and cranberries and stir into mix

3: Cut pork chops into 1/2″ thick slices and flatten using a meat tenderizer till meat is ~1/4″ thick. Trim into rectangles.

5: Spread even layer of filling on each chop, rolling them up: roughly 4″ x 2″ finished. Place on tin foiled pan. Garnish with dried parsley, if desired.

1: Mix the meat thoroughly with the seasonings and divide into four equal portions.

2: Peel the hard boiled eggs, dip them in water and coat them in flour

3: Wrap each egg evenly in a portion of meat, being sure they are covered completely

4: Beat the raw egg then dip each wrapped egg in the beaten egg then coat thoroughly in breadcrumbs.

7: Bake meat wrapped eggs until golden brown on a cookie sheet at 400°F; about 30 minutes.

2: In a medium bowl, mix together all ingredients

3: Spread the coated nuts on a large well buttered baking sheet and bake them for approximately 20-30 minutes. Stir and scrape them on the pan every 5 minutes and return them to the oven until the nuts smell rich and toasty and are glossy brown. Be careful not to burn them!

4: Remove the pan from the oven. Scrape the nuts up with a spoon or spatula occasionally as they are cooling or they will stick together.

Following are my suggestions for the state measures.

From the legislature. This measure solidifies in to the state constitution that which is already law, the governor’s ability to declare a disaster. Additionally, it gives the governor the ability to transfer money from certain funds to pay for disaster response and recovery. To counter this authority being abused, the legislature will convene within 30 days to pass law as to what action to take. Sounds reasonable to me.

From the legislature. This measure tidies up some text in the constitution. Just vote Yes.

This measure makes it unconstitutional for a local government (state, county, or city) to impose any new taxes or fees on transferring real estate interests. What does that mean? Well, nothing really as it is already against the law, but by writing it in to the constitution means that should we as a people or the legislature decide a transfer tax/fee is needed, it would require amending the constitution again to allow it.

It’s time to be adults and admit the prohibition on marijuana is going to end, it’s just a matter of time. Many states already have medical exemptions, and several others have measures this election to legalize it. The sooner we start the legalization process, the sooner we can start regulating, standardizing, and taxing it. Yes, some people will grow there own (they already do), but as it becomes cheaper to buy than grow, those who choose to use, will buy it instead. As a comparison, it is legal to grow your own tobacco, but no one does. As for marijuana being a gateway drug, it’s no more of one than alcohol, tobacco, pain pills, and a plethora of other legal drugs, which are just as if not more harmful. Finally, if this measure does pass, it will most likely end up in the Supreme Court as a they will have to decide whether the legality of marijuana is the federal or state’s right to set.

I’ll admit that all I know about this topic is what I’ve read in the Voter’s Guide and a brief description from http://www.montereybayaquarium.org/cr/cr_seafoodwatch/sfw_gear.aspx
, but here is what took away from it. Gill nets are already illegal on all inline waters except for the Columbia, and while these types of nets are known for unintentionally catching other sea life than what the fishers are supposed to catch, such as wild salmon instead of hatchery salmon, but so do other forms of fishing. By banning gill nets to Oregon fishers, this could likely end Oregon commercial fishing on the Columbia as Washington fishers can still use them. While we should work to ban all gill net fishing on the Columbia, we should work with Washington to ban it together, or we aren’t really helping the environment at all, just hurting our economy.

I’m not a big gambler, but I have no issue with casinos. They take money from those who are willing to part with it even if they can’t afford it. What those casinos do with the money is more of what is at stake. While tribal casinos give back less to the state than the proposed private casino would, the tribal casinos mainly use the profits for the betterment of their community, which in turn helps us out be being less of a strain on our resources, whereas a private casino, well we don’t know what a private casino will do with it, but most likely take it out of the state and put it in the coffers of their share holders.

We live in a country that allows some people to amass great wealth, usually on the backs of others. The estate tax (or “death tax” for those who wish)
is a way of spreading some of that wealth around after that person passes. The current Oregon estate tax is levied again those people who’s estates are over 1 Million dollars, but not on that first million, so at least that much can go to their heirs untouched. The rest is taxed on a sliding scale. By doing away with the estate tax, the state government will lose vital funds used to provide services to all Oregonian, and while 1 million dollars may seem a little low by today’s standards, doing away with it entirely will harm many more than it will benefit.

I really want to say YES to this one, but it’s not a good plan. The kicker fund is inconsistent because it’s what is left over if the state under-estimates how much money it needs from corporate taxes, which can be $0. We need to fund out schools with consistent amounts so that they can budget regularly, not throw a handful of money at them one moment and none the next. 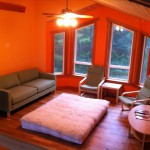 After more than a year, IKEA finally restocked a specific model of sofa-bed that we’ve been waiting for. I purchased it in November and it took me another 4 months to finally make a trip to Fernhaven. On Presidents Day, Peggy and I rented a trailer, hauled the boxes out there, and put it together. Now Fernhaven’s loft is complete.

On OPB this morning I heard a story that said the Senate Democrats are losing their “supermajority”, the filibuster-proof 60 votes, because of Republican Scott Brown’s election in Massachusetts this week.  Supermajority? Who are they kidding? The Democratic Party is so fractured as to make it impotent.  With progressives on one side and “Blue Dogs” on the other of nearly every major issue – abortion, health care, gay marriage, gun control, immigration – it’s no surprise that one year after the “Democratic Takeover” nothing has happened.  Too bad the Democrats can’t agree on ANYTHING, or we might actually see some of this “Change” that Obama promised.  At least the Republicans got things done with their “tow the line or you’re out” mentality.

If your a registered voter in Oregon, you should have received your Voter’s Pamphlet for the special election we’re having in a few weeks on a pair of tax measures submitted by the state legislature.  If passed, these measures will add to the General Fund, which in turn pays for education, health care, public safety, and other state provided services.

Basically, this measure creates extra tax brackets for earners over $125,000 and raises taxes for those people. The tax rate is higher for the first 3 years, and then lowers a bit in 2012.

My View: While this tax affects a few S-Corporations (businesses whose profits pass directly to the owner), most affected by this tax are wealthy individuals, who can afford to give back to the community that helped make them wealthy.

My View: I’ve emphasized a few words above, profits and revenue.  Profit is income minus business expenses (including paying employees) where as revenue is just income.  The new minimum tax is based on what a business takes in regardless of what they pay out in expenses.  For example, if a business does $2 MILLION in sales and has $2 MILLION in overhead (employees, rent, merchandise, etc.), it has profits of $0.  They would have to pay $1500, which is the minimum tax based on revenue.  To meet this they will have to either reduce spending, either by cutting benefits, wages/salaries, or workers, or increase prices.

On a different note, while the amount in comparison seems trivial, that can add up over a business’s supply chain.  An example is a grocery store who buys bread from a bakery who buys flour from a mill who buys wheat from a farmer who buys fertilizer and seed, etc.  This “sales tax” will either increase the cost to consumer or encourage conglomerations, cutting out the smaller businesses.

In the end this is a sales tax and a sales tax is the “third leg” of taxation that Oregon has fought against for many years, but desperately needs.  Personally, I don’t like the price changing at the register, so this type of sales tax, where the tax will be built in to the price the consumer pays, is one that I can get behind.